There is a heated competition for the health insurance market battle. Not only do the players need to keep their pace with the consumer’s trend, but also to deploy a precise communication to capture customer’s attention. It is a highly competitive market where both existing and well-established insurance providers and new players all join in. Even though Generali is one of the world's leading insurers with a worldwide reputation and almost 200 years of experience, the game is not easy.

Generali has run lead-generation campaigns on the online platforms since 2017. However, in order to surf on the fierce competition, the company decided to break into the Blue Ocean market, seeking a new channel to reach new potential customers in a less competitive market. The key to success is to find a new market by creating new demand for those customers who never thought of buying a health insurance before. In other words, the strategy is to attract customers at the early stage of customer journey.

In 2019, Generali decided to deploy the Blue Ocean strategy by using LINE Ads Platform (LAP) to spearhead new market penetration. LAP helped Generali reached a database of 46 million customers through different locations on the Smart Channel on chat page, LINE Timeline, banner ads on LINE Today, LINE TV and LINE Wallet. The system helped the company choose the most effective position that meets the chosen objective and target group. The platform allowed the company to put call-to-action buttons linking to the website or LINE Official Account to help them increase followers. Moreover, LAP allowed the company to select several media objectives that matched the business needs as shown in the infographic below. The key action that Generali chose was website conversion, drawing the target group to its website to get more information and submit a registration (Lead Registration). In addition, Generali used LAP to expand its customer base, reaching new customers by defining a wide target group to learn the customer’s behavior on LINE platform better while excluding the existing customer base such as website converters (those who are already registered) within the last 45 days to run a website conversion campaign.

All of these tactics were for reaching new customers and expanding the market.

Generali adjusted its communication strategy to fit with LINE users which was a mass audience group. The communication tactic was set to bring a clear and concise message as well as to stimulate action. The result of this implementation was impressive, especially in terms of cost per head that was reduced by 10% comparing to usage of other platforms in 2019. Moreover, there was a continual campaign assessment and improvement, yielding optimum return on ad spend (ROAS) as well as expanding the market just like the planned strategy.

Who were Generali’s target groups?

1) Core audience defined by interest: using LAP enabled Generali to reach new target groups that were not limited to those interested in finance. There were 18 groups of interest to choose from such as health&fitness, career&business, automobiles, houses, and etc. 3) Lookalike audience: This group was defined as new customers who shared similar traits with the existing customers such as LINE Official Account followers or website visitors. This method helped the company expand the target group as much as 15%. In the case of Generali, the lookalike audience targeting used 1-12% of the website visitor database. Results: Choose the right platform to reach to your goal easier

Comparing to Generali’s campaigns on other platforms in 2019, it was found that LAP brought results with 10% lower cost per head, especially for the objective of website conversion. 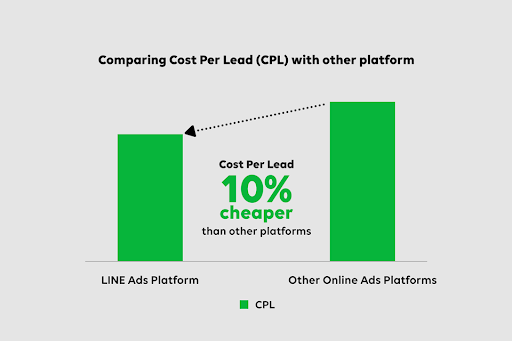 1. The campaigning started with defining a larger mass audience to learn and take advantage of the LINE user database

2. There were continual campaign testings that covered products, proposals, target groups, and creative pieces to ensure the best results.

3. The product offerings were easy to understand and simple enough to appeal the mass audience on LINE platform. It is obvious to say that when ‘the right platform’ meets ‘the right strategy’, the outcome is campaign’s optimum effectiveness. Today, LAP has become the important jigsaw piece that helps Generali cap the health insurance business with a new approach, reaching the Blue Ocean gracefully as well as positioning the company in a spotlight with unique differences that proudly bolds out the image of this world-class insurance service provider.